The Mahabharata, is being written again — one 140-character tweet at a time 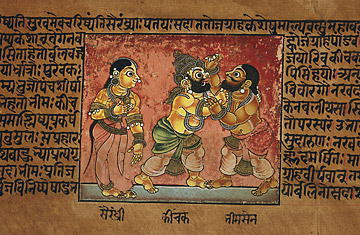 It’s the world’s longest poem — over 1.8 million words, containing over one hundred thousand verses and approximately ten times the length of the Iliad and Odyssey combined. And now India’s celebrated epic the Mahabharata, the writing of which began around 300 B. C. by the venerated Hindu figure Vyasa, is being written again — one 140-character tweet at a time.

Chindu Sreedharan, 36, lecturer in Journalism and Communication at the Media School in Bournemouth University, England, says he has always had a soft spot for the epic tale, the narrative of a war between cousins Pandavas and Kauravas. “It’s more cultural than religious,” he says. “Most [Indians] know the storyline. It’s something our grandmothers have told us.” That and his keen interest in social media led Sreedharan to start experimenting with the epic, writing it in short bursts online to see how it would read in that format. After three weeks of posting entries, his “Epicretold” twitter feed had gathered more than 1,000 followers.