In India, the NRI Groom Goes Out of Style (TIME) 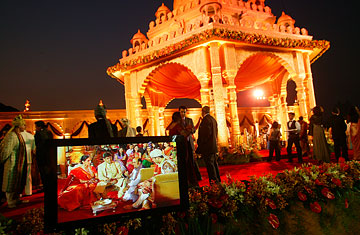 On India’s vast array of matchmaking web sites, horoscopes are being replaced by income statements. Questions about family history are being dwarfed by questions about potential layoffs. And the U.S.-based, NRI (Non Resident Indian) groom — once the most coveted prize at the top of the Indian matrimonial hierarchy and seen by many families in India as their daughter’s ticket to a better life — has become the latest casualty of the world’s economic downturn.

Ten years ago, Indian men born or working abroad could almost be assured of meeting a dozen or so possible brides on wife-hunting trips to India. “Typically, NRI women want to marry NRI men, and NRI men want to marry native Indian women,” says Sandeep Amar, business head for SimplyMarry.com. (The discrepancy comes from the perception that a woman living in India will have remained true to the culture under less western influence.)