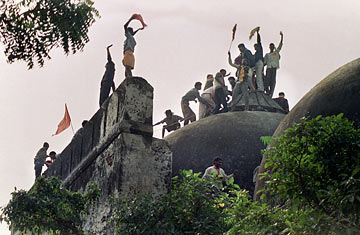 Even as Prime Minister Manmohan Singh arrived in Washington Monday to represent an India emerging as a cosmopolitan economic powerhouse, his Parliament sent an ugly reminder that the world’s largest democracy has a dark side: both chambers of India’s Parliament have had to be adjourned repeatedly over the past two days amid a furor over leaked findings of a judicial inquiry into the destruction of the Babri mosque in Ayodhya in 1992.

The mosque was destroyed by Hindu extremists in order to rebuild a Hindu temple that had stood on the same site hundreds of years earlier, and it triggered a wave of Hindu-Muslim violence that left more than 2,000 people dead. Seventeen years later, leaks from the report of the Liberhan Commission (named for the presiding judge), which allegedly held some current leaders of the opposition Bharatiya Janata Party (BJP) culpable for the destruction of the mosque, provoked scuffles in Parliament, offering a reminder that beneath the “Shining India” image of modernity the BJP had once proclaimed lie some ugly, unresolved communal tensions.