Is India exporting radiation to the world? (ABC News)

India has become a reprocessing hub for waste from around the world. But the regulation is lax, leading to concerns
radioactive material may be in the products exported back to the world. 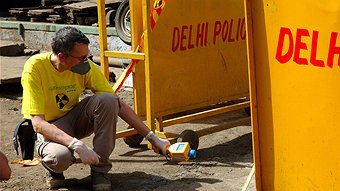 ON APRIL 7, 2010, the Atomic Energy Regulatory Board of India (AERB) received a fax from one of Delhi’s top hospitals, the Indraprastha Apollo hospital, that stated that a scrap metal dealer had been admitted to the hospital and was showing symptoms of radiation exposure.

Deepak Jain, a 27-year-old had been rushed to the hospital after a high fever hadn’t subsided for seven days and the skin on his hand started peeling off. He had been in his shop in the West Delhi industrial area of Mayapuri when the incident happened. Mayapuri is home to thousands of workers in the scrap trade and houses shops specialising in various metals. Most of this metal originates overseas and makes its way to Mayapuri through importers who sell it to these shops.

Jain was among the eight people who were affected by radiation poisoning. He, like the others, had been exposed to cobalt-60, which had leaked from an irradiation machine being dismantled in the area. Jain refused the Rs 200,000 (A$ 4,000) compensation offered to him by the government and is instead suing Delhi University, from whose labs the machine originated. The university had bought the gamma irradiation machine in 1970 but it had not been used since the mid-1980s.