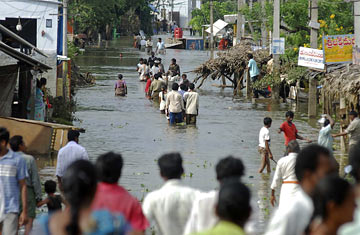 Indian farmers had been praying for rain after the weakest monsoon season in 40 years had left their crops stricken by drought. But when the rains finally came, forceful and incessant at six times their normal levels, they left behind the worst floods southern India had seen in more than a century.

Weather officials blamed the heavy rains in Karnataka and Andhra Pradesh on a low-pressure system over the Bay of Bengal. So far, over 250 people have died in flooding made worse when officials were forced to open dams for fear they might burst. Some 1,500 relief camps have been set up for the estimated 2.5 million people who were displaced as the raging water destroyed entire villages, washing away roads, bridges, crops and livestock.