The Book of Amish (The Writer)

Novelist Amish Tripathi meant to spend his career as a mathematician. But the numbers added up to a writer’s life. 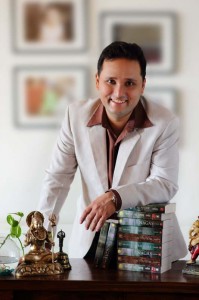 In America, God sells. In India, not so much. That was the thinking anyway until Amish Tripathi, now a literary rock star in the country, often going by only one name – Amish – hit the circuit. After the first book in his trilogy on the Hindu God Shiva was rejected by nearly two dozen publishers, he self-published The Immortals of Meluha, which landed on best-seller lists within a week of its launch. The Shiva trilogy became the fastest-selling book series in the history of Indian publishing, with 1.5 million copies sold as of this spring.

Earlier this year, Tripathi’s name was in the news again for receiving a $1 million advance from an Indian publisher for his next ‒ as yet unwritten ‒ trilogy, making him the first Indian in the history of publishing to receive this high sum. The Immortals of Meluha was released in the U.K. in January 2013, and the book will be released in the U.S. in the summer of 2014. Negotiations are underway for a movie deal.